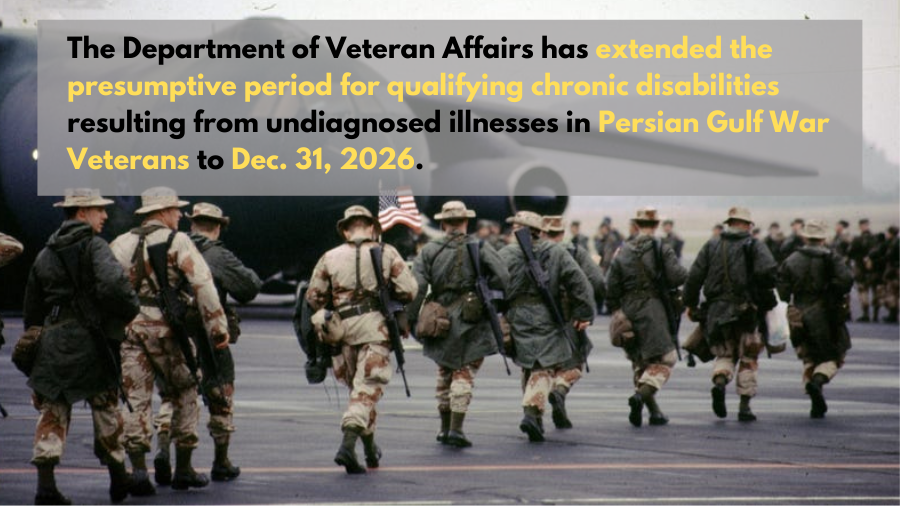 Dear Veteran,   The Department of Veteran Affairs has extended the presumptive period for qualifying chronic disabilities resulting from undiagnosed illnesses in Persian Gulf War Veterans to December 31, 2026.   Prior to the extension, Persian Gulf War Veterans had to file a claim for disability compensation before the end of the 2021 calendar year. VA is extending the presumptive period for qualifying chronic disabilities of 10% or more to ensure benefits established by Congress are fairly administered.   With scientific uncertainty remaining as to the cause and time of onset of illnesses suffered by Persian Gulf War Veterans and current research studies are inconclusive, limiting entitlement to benefits due to the expiration of the presumptive period would be premature. If an extension of the current presumptive period was not implemented, Service members whose conditions arise after December 31, 2021, would be substantially disadvantaged compared to Service members whose conditions manifested at an earlier date.   VA presumes certain medically unexplained illnesses are related to Gulf War service without regard to cause. These include: chronic fatigue syndrome, fibromyalgia, functional gastrointestinal disorders, and undiagnosed illnesses with symptoms that may include but are not limited to: abnormal weight loss, cardiovascular disease, muscle and joint pain, headache, menstrual disorders, neurological and psychological problems, skin conditions, respiratory disorders, and sleep disturbances.   A wide variety of symptoms can qualify a Gulf War Veteran for presumptive service-connection, Veterans who are experiencing unexplained medical issues are encouraged to file a claim.